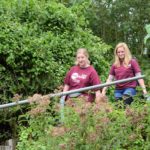 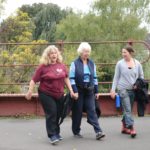 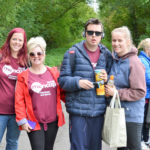 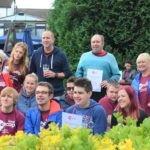 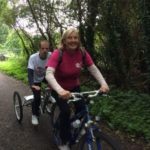 We had our annual sponsored walk, cycle, wheelchair push yesterday and once again we had a very well attended event.  60 people turned up to take part in distances of either 5, 10 or 25 miles. Some people arrived with the expectation of doing as much as they can in the amount of time they felt comfortable, a few people managed to go that little bit further than expected, which was great news, a real sense of achievement was gained by everyone, especially Daniel Coll who kept going and achieved the 5 miles.

We welcomed some new cyclists to the day; One of our 18+ members, Stephen Gray attended for the first time and he had not been on his bike this year; and last year he went on very reluctantly. Liz, Stephen’s mum tried to get him involved several times at Warmley Wheelers and he had not wanted to try out any of the bikes. So to cycle 10 miles was a great achievement. “Following the successful ride today I am going to take him out more regularly” said Liz and “On our way home he said ‘Wow nice bike’.”  “It was great to be part of the fund raising today” Liz added.

Huge thanks goes to Kim Cole our Super Saturday leader, her sons Dean and Ben  and her friends and family who are our regular supporters of the event, their enthusiasm stands out and helps to encourage the other participants.

Barry Hollyman very kindly lent us the use of his PA system which was a welcome relief for our Chair Lisa O’Brien as it meant she didn’t have to shout too loud when it came to the certificate presentation that was held in the garden at the end, especially after pushing her son Jon the full 5 miles in his chair, “The chair alone weighed 3 stone”. Exclaimed Lisa.

We had great attendance from our Trustees Russ Pocock, Kit Kettel and family who took part in the walk and Sue Jeffrey and Andrea Westlake who manned the water station at Bitton.  The staff at Bitton were also very accommodating by allowing us to site a water station; as they had a very busy event taking place themselves.

Fundraiser Amanda Leonard and Keynsham Juniors leader Nicola Hodges ensured everyone could sign in at the start, and received their certificate with the correct achievement, (fingers crossed) and then served the food at the end. The day went smoothly and some fab photos were taken throughout the day, you will find them on our Facebook page.

It was good to see some of our volunteers taking part and getting involved, they already give up their time to help out at our various clubs but to also attend on a Sunday, raise money, and for some like Niall Tomlins to get on a bike for the first time in a while was just amazing, thank you.

The bird in Hand once again were superb, providing hot refreshments for everyone who took part.

All that’s left to say is thank you to everyone who helped out, took part, and of course who sponsored the participants.

Over the next couple of months as the money comes in we will let you know how much we raised.

So until next time…which is Saturday 11th November, our annual quiz night, this time at the Scout Hut Keynsham.  Look out for more details coming soon.