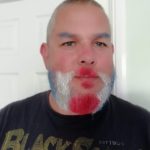 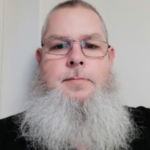 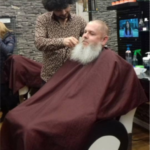 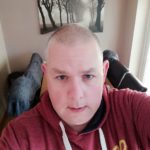 Volunteer Jason Preston pledged to go without shaving his beard for a whole year. Jason started his mammoth beard growing activity in February 2018 and continued for 12 months.  All Jason asked for was £1 sponsorship from everyone he knows and meets throughout the year.

During this time he has dyed his beard various colours for different events including decorating it at Christmas.

After a whole year of not shaving, Jason has had his beard shaved. He was joined by some of the children and young people from our Radstock group who cheered him on.  Special thanks goes to Diamond Scissors barbers in Radstock for staying open late for the big shave off.  Jason raised over £1100 with this hair raising challenge, the money will go a long way to providing new and exciting activities that will broaden the horizons of the members of the club.

Jason is an avid supporter of the society and in particular Radstock Juniors he is a fierce fundraiser, so far he has taken part in sponsored bike rides from Midsomer Norton to Weston, from Midsomer Norton to Brean, and the Prudential 100 mile bike ride in London, most recently he held a fundraising disco party in February last year. Since 2013 Jason has raised over £4600 for the club.