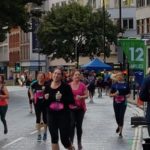 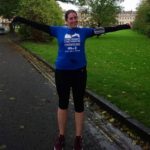 Well done to deputy club leader Ceri Lloyd for completing her  amazing 4 half marathons in 4 weeks challenge. Ceri had a shaky start to her marathon running; in March this year she was due to run the Bath Half, which was cancelled due to snow. She then decided to raise the bar and run the Bristol Half, Cheltenham Half, and Cardiff Half then finish off with the most challenging of all; The Wales Trail Half Marathon. All of these events took place on consecutive weeks through September and October. After completing the first 3, Ceri was unable to run in the 4th event as it had been cancelled due to flooding.  Not one to be put off easily, Ceri decided to still run the 13.2 mile distance along the Bath/ Bristol cycle path instead. She was accompanied by a friend who cycled along with her in the  pouring rain.  Ceri was raising funds for us and another charity which is close to her heart and raised over £1000 in total, of which a
massive £530 is for us which is amazing. We think Ceri is incredible! Thank you from all at Keynsham Mencap.